Your thyroid gland is a small gland, normally weighing less than one ounce, located in the front of the neck. It is made up of two halves, called lobes, that lie along the windpipe (trachea) and are joined together by a narrow band of thyroid tissue, known as the isthmus. 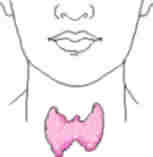 The thyroid is situated just below your "Adams apple" or larynx. During development (inside the womb) the thyroid gland originates in the back of the tongue, but it normally migrates to the front of the neck before birth. Sometimes it fails to migrate properly and is located high in the neck or even in the back of the tongue (lingual thyroid) This is very rare. At other times it may migrate too far and ends up in the chest (this is also rare).

The function of the thyroid gland is to take iodine, found in many foods, and convert it into thyroid hormones: thyroxine (T4) and triiodothyronine (T3). Thyroid cells are the only cells in the body which can absorb iodine. These cells combine iodine and the amino acid tyrosine to make T3 and T4. T3 and T4 are then released into the blood stream and are transported throughout the body where they control metabolism (conversion of oxygen and calories to energy). Every cell in the body depends upon thyroid hormones for regulation of their metabolism. The normal thyroid gland produces about 80% T4 and about 20% T3, however, T3 possesses about four times the hormone "strength" as T4. 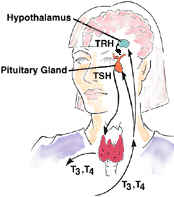